Call me back now!

The mast consists of two parts connected by a bushing. The top of the mast is a knock, two blocks and two braces with eyelets are fixed on it. Blocks serve for the routing of a halyard and a stalk. Two staples with eyelets - to secure the side guards and buckstays. In the lower part of the mast there are grooves for fixing the mast during installation in the stapes.

1). The mast is inserted into the stack, the through-bolt of the stapes falls into the grooves of the spur and the mast is fixed from rotation.

2). When the mast is installed, when it is in the horizontal position, it is carried out the rigs, the staff, the halyard (tackle for lifting the sail) and the guy. With the help of a carbine, the tack angle of the sail is fixed on the staple. Fal is attached to the sail through the eyelet of the angle. The second end, passing through the block on the mast's leg, is fixed on the duck, mounted on the stap. The front sail of the sail is hinged with a weaker to the mast through special eyelets.

3). Lifting of the mast. The mast is placed in a vertical position with the help of a stalk. The running rigging is stretched (stags, buckets, guys).

CEEEPS - a device for installing the spur of the mast on a catamaran. The stapes is mounted on a frame (bulkhead) and enables the mast to be raised and lowered by means of a swivel joint.

1). The stapes are installed on the first frame (bulkhead). To the middle of the frame is attached a staple with fixed hinges, drilled four through holes d = 5mm. The drilling location is determined by the holes in the hinges. Through the through bolts m5 the stapes is fixed on the front frame.

2). Below the fixed structure, the fingerboard is installed, the support for the stapes and mast. Pärtners additionally provides vertical and lateral stability of the mast. For installation, two holes in the frame are drilled and secured with through bolts.

The articulation of the stapes and the frame allows the mast to be driven, if necessary, to the horizontal position.

1) sailing armament should be "popular" - that is, very affordable;

2) sailing arms should be suitable for any Boathouse model;

3) sailing armament should be as simple and effective as possible - so that a person who never sailed could start from the first time, without special skills, from point A, and return to point A, only under one sail;

1) The simplest version of sailing weapons - with a mast, a staysail, a steering oar and rigging, costs $ 266. And the most complete version of sailing armament - with a five-meter mast, a drill pipe with drills and stapes, with a boom, a grotto, a staysail, a steering and rigging - $ 944! In other words - this "perpetual" engine, delivering a lot of fun, is very affordable.

2) Any of the types of sailing weapons Bothaus fits the whole Boathouse range, starting from kayaks STREAM, and ending with the large catamarans TRAVEL-MAX. Moreover, by selecting the boat model you are interested in, you can go into the 3D view and see how your boat will look with the sail. And also, what additional equipment can be installed on it.

3) At the final stage of the tests, people were selected who had no experience of sailing. And from the first time, at a wind speed of only 3 - 4 m / s, they started from the beach, and returned back under one sail alone. Very simple control and effective operation of the sail and dock, allow you to go even against the wind at an acute angle. Therefore, even for beginners it was not difficult for the rudder to choose the direction of movement and keep the sail in tension.

4) The main element of sailing armament, which is dangerous, is a boom. On sailing armament, the two-meter booth is made of a light aluminum pipe, which is located at a height of 1m on the deck. That is, the boom is thrown over the heads of people sitting in front.

But the main thing - this is the pleasure that you get when moving from the wind energy. And still important is the economic aspect - you travel and rest, without spending money on gasoline. A trifle, but nice.

"Having BOATHOUSE - you live with pleasure".

9. Steering oar on a rowlock with fastening to the transom - 1.

Additional equipment - steering instead of the steering oar - $ 100. 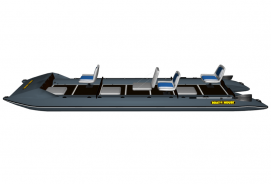